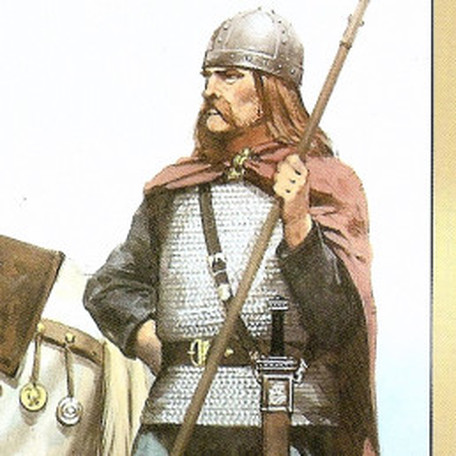 Gjúki, AD 340-407
Gjúki (also Gebicca, Gifica, Gibica, Gebicar, Gibicho or Gippich) is the King of the Burgundians. He is the father of Gundomar I, Giselher and Gunther.  He has also two daughters Gudny and Gudrun. Gotthorm (slayer of Sigurd) is his stepson from his wife Grimhild's previous marriage. As one of the earliest kings of the Nibelungs, the clan is called the Gjúkungar.
Grimhild or Grímhildr (masked battle) is a beautiful but evil woman. She married to king Gjúki, of southern Rhine, Burgundy. She has three sons, Gunnarr, Hǫgni and Guttormr, and a daughter, Gudrun. It is told she is a sorceress…

Grimhild  who gave Sigurðr a magic potion that made him forget that he ever married his wife Brynhildr, so that he would marry Gudrun, her daughter. But she did not stop there. She wanted her son Gunnar to marry Brynhildr, but she refused to marry him, and she would only marry the man who could cross the ring of flames she put up around herself. So Grímhildr talked Sigurðr into helping Gunnarr marry Brynhildr. Since Sigurðr was the only one who could cross the flames he and Gunnarr switched bodies, so Gunnar's body could cross the flames. Brynhildr then married Gunnar, because she made a promise. When Brynhildr learned that Sigurðr had betrayed her with another woman (Gudrun), not knowing he had been bewitched into doing so by Grímhild, she was out to get revenge. She ended up killing Sigurð and herself by the end of the saga. Grímhildr then made Gudrun marry Brynhild's brother Atli. Gudrun didn't want to marry him because she knew he would end up killing her brothers. This is the last that we hear of Grímhild in the Völsunga saga; it is probable that the ring's curse also brings misfortune and even death upon Grímhild herself.[3]

In legend[edit]
The destruction of Worms and the Burgundian kingdom by the Huns became the subject of heroic legends that were afterwards incorporated into many works of medieval literature such as the Middle High German epic poem, the Nibelungenlied, where King Gunther and Queen Brünhild hold their court at Worms, and Siegfried comes to woo Gunther's sister Kriemhild. In Old Norse sources, the names are Gunnar, Brynhild, Sigurd, and Gudrun as normally rendered in English.

In the Waltharius, Gibicho and his son Guntharius are kings of the Franks, whereas the king of the Burgundians is named Heriricus who is father to Hiltgunt, the heroine of the story. Hagano appears here as a kinsman of Gibicho and Guntharius, but the relationship is not made explicit. In their combats with Waltharius, Guntharius loses a leg, Hagano loses half his face and one eye, and Waltharius loses a hand. But there is no hint in later tales that Gunther is in any way maimed. Another version of the story of Waltharius and Hiltgunt appears in the Norse Thidreks saga, but in this account Gunther plays no part at all.

Gunther otherwise only appears in tales relating to Siegfried and the fall of the Niflungs. In most texts, such as the Nibelungenlied, Gunther/Gunnar seeks to make Brünhild his wife, but can win her and master her only because the hero Siegfried/Sigurd aids him and takes his place. Siegfried marries Gunther's sister Kriemhild/Gudrun. An impassioned debate between Brünhild and Kriemhild about their respective status leads to the secret that Siegfried had taken Gunther's place being revealed. Gunther then agrees to assist in Siegfried's murder. After Siegfried is murdered, Brünhild commits suicide. Gunther and his brothers, despite deep suspicions of treachery, accept an invitation from Etzel, or Atli in Old Norse (i.e., Attila the Hun), to visit his court. There Gunther and his brothers were betrayed. In some versions of the story, they were thrown in a snake pit to die, while in others they were killed fighting the Huns and their allies.

According to the Norse poem "Atlamal", Gunnar remarried after Brynhild's death to a woman named Glaumvor.

These stories were later adapted by Richard Wagner into Der Ring Des Nibelungen. Gunther appears in the last part Gotterdammerung. From there events happen in a similar manner to the Volsung Saga. After Hagen kills Siegfried he and Gunther argue over the Ring, leading to Hagen murdering Gunther. 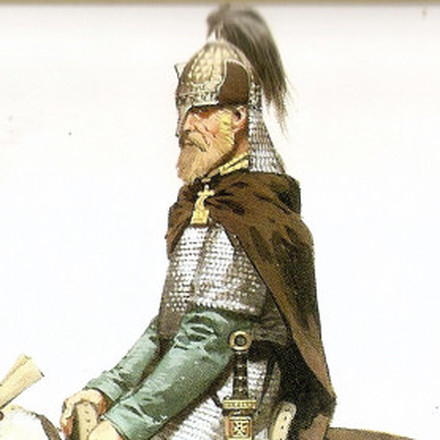 Gundomar I, AD 360-411
Gundomar I (also Gundimar, Godomar, or Godemar) is eldest son and successor of Gebicca, King of the Burgundians from 407-411.
He is the murderer of Sigurd (Sigfried), the dragon slayer.

Giselher, AD 380-436
Giselher, brother to kings Gundomar and Gundaharius (Gunther). His name means "pledged warrior".
He is betrothed to Dietlind, the daughter of Count Rüdiger of Bechelaren. Co-ruler from 407 to 411.

Gunther, AD 385-437
Gunther (Gundahar, Gundahari, Latin Gundaharius, Gundicharius, or Guntharius).
In 406 the Alans, Vandals, the Suevi, and the Burgundians cross the Rhine and invade Gaul. In 411 AD, the Burgundian king Gundahar or Gundicar set up a puppet emperor, Jovinus, in cooperation with Goar, king of the Alans. With the authority of the Gallic emperor that he controlled, Gundahar settles on the left or western (i.e., Roman) bank of the Rhine, between the river Lauter and the Nahe, seizing Worms, Speyer, and Strasbourg. Aas part of a truce, the Emperor Honorius later officially "grant" them the land.
Despite their new status as foederati, Burgundian raids into Roman upper Gallia Belgica become intolerable and were ruthlessly brought to an end in 436, when the Roman general Flavius Aetius calls in Hun mercenaries who overwhelmed the Rhineland kingdom (with its capital at the old Celtic Roman settlement of Borbetomagus, now called Worms) in 437. Gundahar is killed in the fighting, along with the majority of the Burgundian tribe.
Gondioc, AD 410-473
Gondioc (Proto-Germanic: *Gunþawīgaz), also called Gundioc and Gundowech, is King of the Burgundians following the destruction of Worms by the Huns in 436, succeeding Gundahar. In 451, Gondioc joins forces with Flavius Aetius against Attila, the king of the Huns, on the Catalaunian Plains. Gondioc marries the sister of Ricimer, the Gothic general at the time ruling the Western Roman Empire.
Gundobad, the son of Gondioc, succeedes Ricimer in 472, but abdicates after the death of his father in the following year as Gondioc was succeeded by his younger brother Chilperic I. After the death of Chilperic, Burgundy is divided among the sons of Gondioc: Gundobad, Chilperic II of Burgundy, Godomar and Godegisel.
​Chilperic I of Burgundy. AD 420-480
Chilperic I is the King of Burgundy from 473 until his death. He succeedes his brother Gundioch and co-ruled with his nephews Godomar, Gundobad, Chilperic II, and Godegisel.

Chilperic II of Burgundy, AD 443-493
Chilperic II (c. 450 – 493) is the King of Burgundy in Valence from 473 until his death, though initially co-ruler with his father Gondioc from 463. He begins his reign in 473 after the partition of Burgundy with his younger brothers Godegisel, Gundobad and Godomar; he rules from Valentia Julia (Valence) and his brothers rule respectively from Geneva, Vienne, and Lyon.
In the early 470s Chilperic is forced to submit to the authority of the Roman Empire by the magister militum Ecdicius Avitus. In 475 he shelter an exiled Ecdicius after the Visigoths had obtained possession of the Auvergne.
After his brother Gundobad has removed his other brother Godomar (Gundomar) in 486, he turned on Chilperic. In 493 Gundobad assassinated Chilperic and have his wife drowned by tying a stone round her neck and Chilperic's two daughters driven into exile. The older daughter, Chroma become a nun. The other Clotilde, who fled to her uncle Godegisel ,will be seen by envoys of Clovis I King of the Franks, who tell their master of her beauty and intelligence. Clovis then ask Gundobad for Clotilde's hand in marriage. Gundobad have been afraid to deny him…


Godegisel, AD 445-500
Godegisel is the King of Burgundy in Vienne and Geneva from 473–500.
The battle with his third brother, Godegisel, will rage long. Clotilde, queen of Franks whose father had been killed by Gundobad, was not likely to encourage good relations between the Franks and the Burgundians. Together they will crush Gundobad's force in 500. But Gundobad later regaines his power and besieges Godegisel, locked up in the city of Vienne, murder him in 501 in an Arian church along with the bishop.

Gundobad, AD 452-516
Gundobad (Latin: Flavius Gundobadus) is King of the Burgundians (473 – 516), succeeding his father Gundioc of Burgundy.
Gundobad seizes the title of Patrician when his uncle Ricimer, who had been the power behind the throne for the Western Empire, died on 18 August 472. According to John of Antioch, Gundobad had previously executed the deposed emperor Anthemius on his uncle's orders.
Once in power, Gundobad elevates the current Count of the Domestics, Glycerius, to the position of Western Roman Emperor. However, not long after Gundobad left for Burgundy where his father, Gundioc. Once in Burgundy, his three brothers have been assumed to challenge to his rule: Godegisel, Chilperic II and Gundomar. Gundobad's departure is also connected with the arrival of a new emperor, Julius Nepos, who have the support of the Roman Emperor in Constantinople. Once Julius Nepos landed in Portus (June 474), he deposed Glycerius, whom he made bishop of Salona.
Gundobad set about ridding himself of his brothers. First slain was Gundomar, next killed was Chilperic. And Godegisel at the end.
Gundobad intent to marry his daughter to Clovis, but died shortly. Clovis is really the only likely candidate as a prospective son-in-law for Gundobad shortly after 501. Clotilde is offered to Clovis as a replacement, as an act of diplomacy not subservience.
Following the death of King Clovis of the Franks in 511, the Burgundians will become the most prestigious people in Gaul. He will be favored by the court of Constantinople, who award him the title of magister militum. Gundobad dies peacefully, succeeded by his son Sigismund in 516. He also has another son: Godomar, who would succeed his brother after his death in 524.
The Lex Burgundionum core law code is the product of Gundobad or his chancellery. Gundobad has also an intellectual side, showing a great religious tolerance.